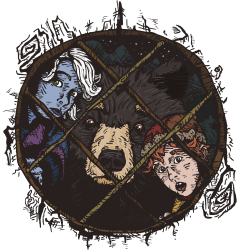 Q: Who is The Titha Mae Series for?

A: The Titha Mae Series is a sprawling new fantasy adventure series for children, advancing readers, and the youngling in all of us – from author Jon B. Dalvy, member of the Authors Guild of Tennessee. If you’ve ever found yourself swept away by the worlds of Middle-earth, Hogwarts, or Earthsea, you’re going to love the lands of Gaela and the fantastical characters within.

Q: Is it fully appropriate for my child? What is the reading level?

A: Yes – Absolutely! The Ballad is written with advancing readers in mind, and all subject matter & language is appropriate as such. If you have a young one in mind for the book or are interested yourself, it is the same reading level and age-appropriateness as The Hobbit and first Harry Potter books (common points of reference), as well as Percy Jackson, etc. Author Jon B. Dalvy has crafted a tale for all ages, one that is written with a modern fervor that keeps today’s children and adults engaged with vibrant language, dialogue, and details, without treading into any adult-only-themes like works of YA fiction and fantasy.

A: Readers are treated to a wonderful journey of self-discovery, morality,  tolerance, and equality as Titha and her Bear-brother, Paw, travel outside their forest home for the first time into the light of Day in The Ballad of Titha Mae. There they befriend a whip-smart Vikingboy, Audun, and a hilarously-talkative old goblin scribe named Nech. An entire mythology unfolds around them as they journey across lush, eclectic landscapes in search of Titha’s father, with the fate of their world in the balance.

Titha and Audun are from entirely different worlds of Night and Day and look very different from one another, yet their friendship blossoms earnestly within a world that wishes to keep them apart. Through them, and many other characters, the importance of empathy, open-mindedness, and family resonate charmingly.

Their journey continues in Book Two, The Dawn of Celtica, as Titha’s Night-dwelling Lunas and the Vikingmen of the Day build a society together for the first time in their shared histories – attracting dangerous attention from outside lands – and the fabled Otherworld itself!

Q: What inspired the book?

A: Titha’s story began as an epic poem back in 2013. The Ballad is the culmination of Dalvy growing up in the Great Smoky Mountains, his love of historical mythology, and his Celtic heritage. Above all, though, it is a love-letter to the bedtime stories he crafted for his three little sisters and two younger brothers:

“My brothers and I having plenty of classical male heroes to choose from growing up, I always found myself making up stories about fantastical young ladies and their own adventures for my little sisters when they were just wee beans (and I mean wee). Things have changed a lot since then, but the Fantasy genre is still one absolutely dominated by male protagonists. ‘The Ballad’ is dedicated to (and based upon) my baby sisters “and the light they hold”, simply because I love them in an indescribable amount, but also in hopes of bringing more lionhearted young heroines to the forefront of children’s fantasy literature. The result is an epic adventure featuring a brand new world ripe with its own rich mythology and eclectic characters, all born of fantastical races both new and old!”

A: Yes! Titha Mae and the Dawn of Celtica is available now from Nechalec Press and Amazon, and will physically debut at the Dogwood Arts Festival in Knoxville, Tennessee next to the Great Smoky Mountains in April 2019! Dalvy is already hard at work on the third book in the series.

About the Author & Illustrator:

A member of the Author’s Guild of Tennessee, Jon is a Nashville, TN-based writer by profession; his work spanning from theatre to movie reviews and literary fiction. A graduate of Middle Tennessee State University, Jon’s used his multiple creative degrees to pursue storytelling in many forms. He’s told tales as a published playwright with The Nashville Repertory Theatre, a pop-culture writer for Skreeonk.com, and led several creative ventures during his four-year career as head writer of Playbuzz.com: crafting content for Disney, TIME, People, MTV, and many others. His heart, however, has never held a tale so dear as it does The Titha Mae Series, his epic fantasy crafted from his Celtic heritage and love of the genre.

Jon harbors a sincere love for and deep fascination with humanity’s great mythologies, as well as wildlife and all of natural history. He is an avid outdoorsman in his free time, and worked for several years at the Nashville Zoo where he was trained and certified in Behavioral Husbandry.

All of his passions have molded The Titha Mae Series; its world rich with Celtic & Norse Mythological influence, vibrant fantasy races, countless beasts, critters, wildlife, and nature so real you’ll wish to walk among it. It is his sincerest hope that you’ll do just that, and that your heart will carve out a Luna-shaped spot for Titha and her companions, too.

To request a manuscript, proposal, or just to reach out, please do not hesitate to contact Jon at jonbdalvy@gmail.com.

About the Cover Artist:

Sandara Tang is an accomplished Fantasy artist with a devoted following both in the fantasy community and on Deviantart. Her vibrant, visceral style has had an admirer in Jon for years, and to have her complete covers for his debut novel, The Ballad of Titha Mae, and then the Sequel Dawn of Celtica, has been “a dream”. Click either of the links above to view her impressive pantheon of work.