The Ballad of Titha Mae: Paperback

The Ballad of Titha Mae: A Fantasy In Twelve Parts by Jon B. Dalvy 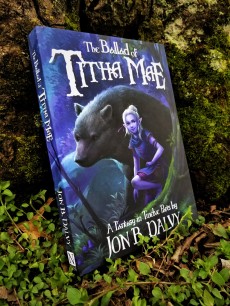 Paperback – The Ballad of Titha Mae

Synopsis: Titha loves her father, Theole, with all her excitable heart. The two are indigo-skinned Lunas: a spritely people forbidden to leave the treehalls of Yythengrey. So when their once friendly Dawnfather, the twisted dragon Vulduun, desecrates their homeland and kidnaps Theole, no one is willing to risk saving him – except his daughter, Titha Mae. Such a brash gesture leads the little Luna and her Bear-brother, Paw, on a fantastical journey far beyond the only foliage-filled mountains she’s ever known.

Raised beneath the Great Smoky Mountains in Knoxville, Tennessee, Jon B. Dalvy crafted The Ballad of Titha Mae from his adventurous Appalachian youth, historical mythology, and his Celtic heritage. Titha Mae was born from these passions, as well as bedtime stories created for his three little sisters and two younger brothers. The brothers having plenty of classical male heroes to choose from growing up, ‘The Ballad’ is dedicated to (and based upon) Jon’s three little sisters “and the light they hold”, in hopes of bringing more inspiring young heroines to the forefront of fantasy literature.

Join Titha and her companions on their epic adventure featuring a brand new world ripe with its own rich mythology and eclectic characters, all born of fantastical races both new and old!

Want a signed copy? You can purchase one from us by clicking here!